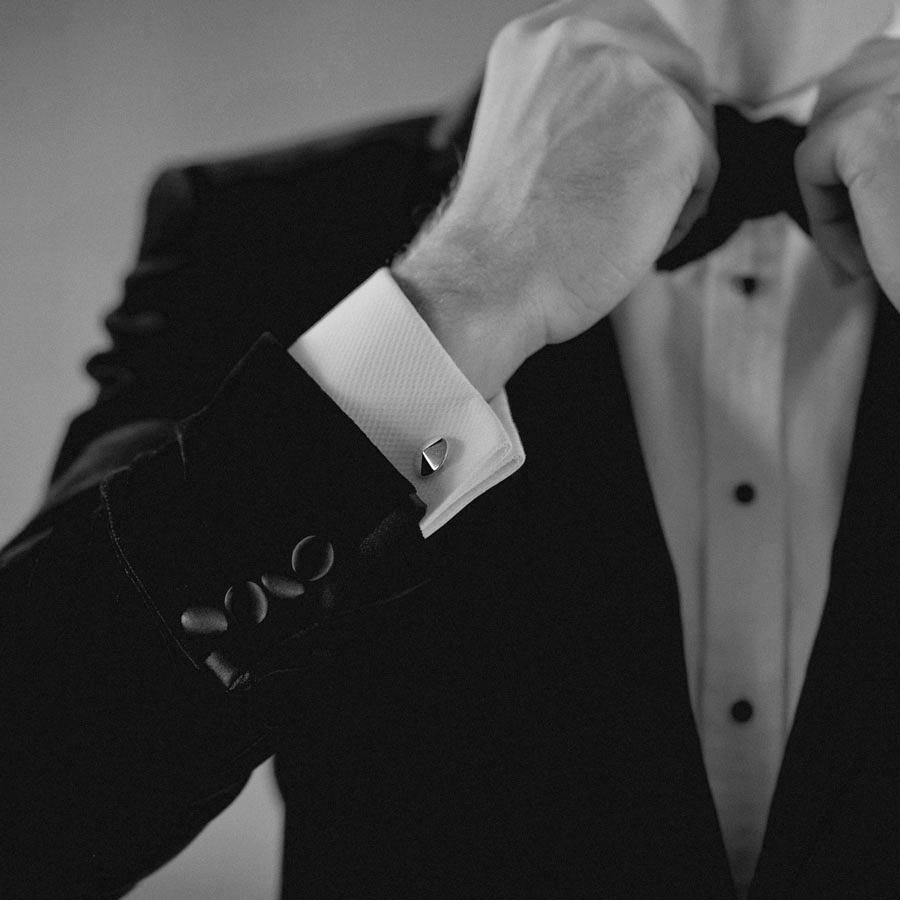 You might be wondering what shirt studs actually are. You might also be wondering why your stiff white tuxedo shirts have holes above the button holes. Well, let’s unravel this mystery. Shirt studs are basically an alternative to buttons, most suited to formal wear. They’re usually made of some form of metal, from antique silver to classic gold, and sometimes feature inlays of various materials, often onyx or crystal. Shirt studs were created in the 19th Century to fasten stiff shirts that were frequently starched to the point that regular buttons wouldn’t stay on. Today, they’re still useful for formal occasions befitting your best tuxedo.

Wearing them is much simpler than you might think. First, feed the shirt stud through the hole above the button holes from the back. Then — as if the button wasn’t there — fasten the shirt using the shirt stud, allowing its feature or pattern to poke through the button hole. It really is as simple as that. Shirt studs add a little something to your look that takes it over the edge, bringing true style and class to your getup.

So, when can you wear shirt studs?

That’s really up to you. Typically, shirt studs are reserved for formality, so you’ll want to get them out for weddings, Christmas parties, business functions and such. They can also be an excellent way of distinguishing yourself from the crowd at any formal function, so don’t feel restricted by these social norms, especially if you’re trying to establish your style and individuality.

If you’re in need of inspiration to wear shirt studs, look no further than James Bond. Even his wax figure looks smooth! Bond’s waxy likeness sports a classic black tuxedo complete with black shirt studs, as worn by Daniel Craig playing the licensed killer in Skyfall. You may have noticed from the examples provided that shirt studs are best paired with a bow tie. Bow ties are generally the preferred necktie of choice when attending formal functions, and so naturally they pair very well with shirt studs. If you are wearing a long tie for your event, however, you may not necessarily need shirt studs, but be aware that if you remove or loosen your tie over the course of the event, white shirt will look much better and more put together if you do choose to wear shirt studs with it.

Selecting the Right Shirt Stud for You

Although the examples shown here mostly display black shirt studs, there are plentiful choices available for those looking for something a little different. Shirt studs are the perfect opportunity for some self-expression, and you can find many for different occasions. You can find themed shirt studs, such as hearts for Valentine’s Day or four-leaf clovers for St. Patrick’s Day. You can also find shirt studs specific to your interests, such as T.V and film-related studs.

Red carpet looks are a good place to go when searching for inspiration for formal attire, also. For example, Jon Hamm pulls of a classic tuxedo with shirt studs in this picture. Whether or not you are Don Draper, shirt studs are a timeless accessory that will give you a timeless look.

Shirt studs are a simple but very effective way of highlighting yourself as stylish, independent, and unique, and every man should consider raising the bar for the next formal function they attend by trying something a little different.